Go deeper when asking for Referrals 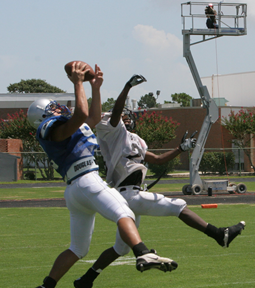 In football, to go deep means having the receiver run down the field to catch the pass. In baseball it means hitting the ball out of the park. In business it means looking further into your Rolodex, your customers lists, your vendor accounts.

It’s not just who you know but who the people you know may know and who they may know. How deep in your relationships can you go. We often just think of who we know personally, but if we dig deeper, ask for our customers to think differently about who they know, and ask-tell the people they know to tell others about you, what a change that could make in your business!

I was talking to a client the other day after a full day seminar and I asked if he knew of any other businesses that could benefit the same way as he did. At first he stumbled and said he couldn’t think of anyone off hand. When I suggested customers or suppliers, a light bulb went off in his head. He said he had never thought of it that way and rattled off five companies that he could introduce me to.

It came as a surprise to me that I had never educated my client on what a good referral was for me and how they could refer me. Although I ask for referrals often, it was never clear to him that an introduction to an introduction would be fine with me. It didn’t have to be a friend or someone they knew well but rather an introduction to a company or an owner they somehow are in contact with in their daily business.

So add this to your referral strategy: education, multilevel, and deeper networks and watch your business grow to the next level or at least to the point that you ask for.

There are no upcoming events.